The Raffles Archives & Museum blog page or RAMpage in short, is created to capture the rich history of the school and as a strategy for the current and past students to re-experience the school’s history through a social media platform.

The RI Museum was established in 1962 at the initiative of Miss C David and Mr P K Hernon with a group of biology students to cater to those interested in natural history.

In 1990, after RI moved from Grange Road to its current Bishan campus, the need to know about RI’s past became more pressing, as new generations of pupils lost touch with the history of the school and its glorious past. Hence, the first Raffles Institution Archives & Museum was opened by then Senior Minister Lee Kuan Yew on 25th March 1994 with the purpose of preserving and showcasing the proud heritage of Raffles Institution. As custodians of RI’s rich history, the Raffles Archives and Museum records, preserves and highlights the school’s illustrious past. Items on display include artifacts from school life in the past, as well as records of the numerous achievements of Rafflesians past and present.

In 2007, as part of the larger upgrading and renovation of the school, the Archives & Museum moved  to a second venue located behind the Y1-4 Atrium, and was launched by the then Senior Minister of State K. Shanmugam on 24 May 2008.

The Raffles Archives and Museum’s move to its third and present home was marked with a visit by Professor Tommy Koh on 25th July 2015. The Archives & Museum’s current premises was made possible with the generous support of Mrs Looi Eng San nee Mdm Gertrude Marsh. 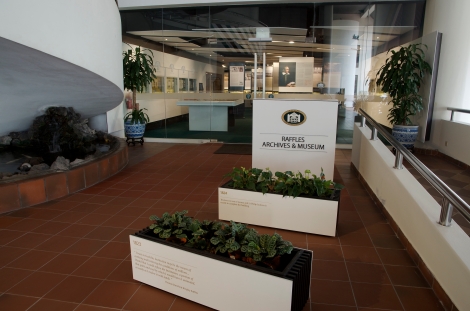 Photos of the interior of the Archives & Museum 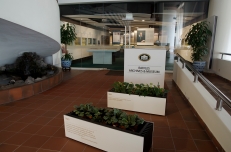 The RI Crest on display at the Raffles Archives and Museum